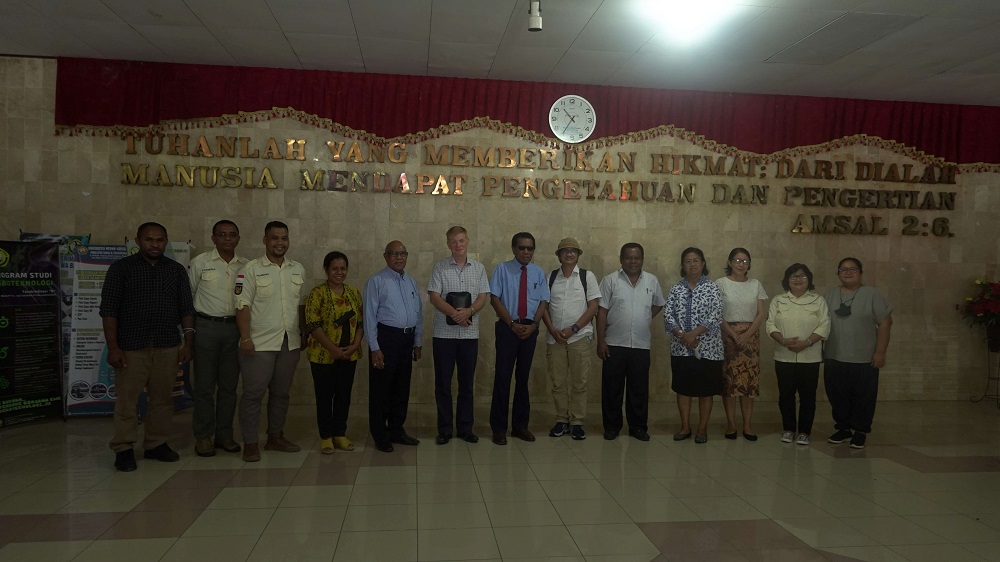 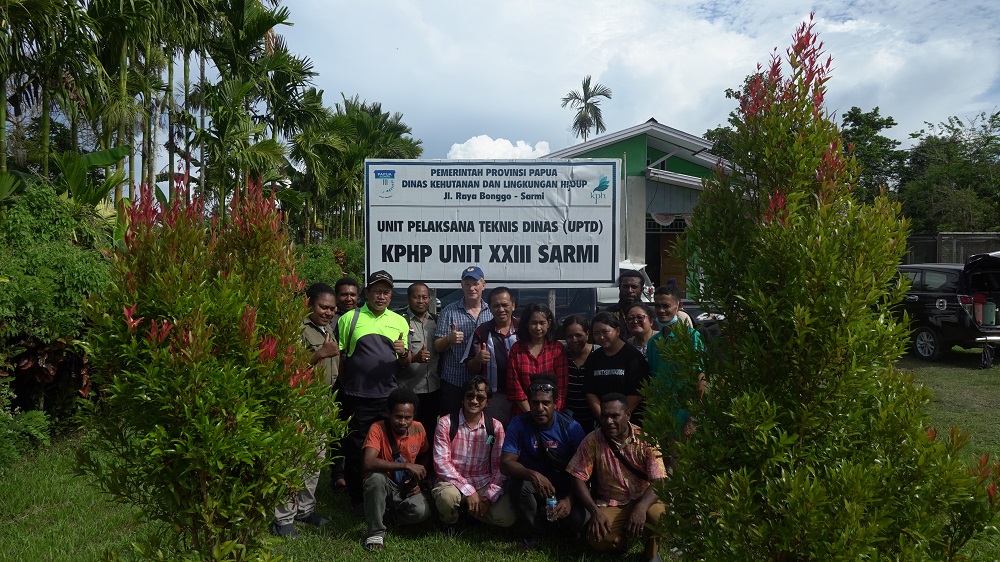 In order to prepare for the implementation of priority programmes in conjunction with FORCLIME, the Papua Forestry and Environment Service (Dinas KLH) held a coordination meeting with FORCLIME on 22 May 2022 in the meeting room of the XXI Production Forest Management Unit (KPHP XXI) office in Sarmi Regency, Papua Province. The meeting was opened by the Head of Planning for Dinas KLH, Dr. Estiko Tri Wiradyo, SH. M.Sc. and was also attended by representatives from KPHP XXI Mamberamo-Sarmi and KPHP XXIII Sarmi.

During his opening address, Dr. Estiko explained that, to date, support for forest management units (KPH) has prioritized the KPH Model, including within the Biak Numfor protected forest (KPHL Biak Numfor). Working in conjunction with FORCLIME, support for the strengthening of FMUs is also now set to be implemented within KPHP XXI and KPHP XXIII. At both of these KPHPs, FORCLIME will offer technical assistance in an effort to improve overall governance, in addition to supporting the development of non-timber forest products (NTFPs). Ultimately, the hope is that the two KPHPs will become examples capable of inspiring the whole of north Papua.

During his presentation, the Acting Head of KPHP XXIII Sarmi, Henoch Kende, explained that in addition to terrestrial areas, the KPHP XXIII area also encompasses the working areas of five islands that have ecotourism potential as fishing spots and turtle nesting locations. Other potential areas of development include eco-tourism within the locations of the area’s waterfalls, the production of Trigona honey and the development of NTFPs such as agarwood leaves, which are used to make agarwood tea. In addition, this area boasts a high level of forest product utilization, including damar and merbau timbers. The area’s wildlife parks (TSL), which are home to many species of bird, also have significant potential but require further data collection, while KPHP XXIII also has potential as a source of agarwood nurseries.

The head of the KPHP Unit XXI planning section at Mamberamo-Sarmi, Debora Sawen, explained during her presentation that KPHP XXI had significant NTFP potential, specifically in terms of red fruit oil and processed sago cookies.
In addition, the area also boasts a number of ecotourism waterfalls and hot springs, however, these will require significant development through advertising and ecotourism design in order to transform them into tourist attractions.

FORCLIME is set to offer various types of support, including the following:
- Technical guidance relating to the preparation of forest management plans (RPHJP).
- A bio-geophysical study of the area will be implemented in stages in line with the availability of FORCLIME funds.
- Leadership training will be offered at the management level at KPH and the Dinas KLH Office.
- Digital marketing training will be offered in an effort to strengthen the Forestry Creative Gallery so that it will be able to support the sale of non-timber forest products from KPHP XXI and KPHP XXIII, which are currently being marketed through the gallery.
- Preparation of a master plan for the development of ecotourism within the Sarmi area.

“FORCLIME support, particularly the study of biodiversity and KPHP XXI potential, should prove very useful during planning processes for KPHP XXIII and will mean that the preparation of RPHJP documents can be undertaken based on the existing potential,” explained Henoch Kende, Acting Head of KPHP XXIII.

The collaborative activities that are outlined in the Community Conservation Agreement (KKM) stipulate various rights and obligations that apply to the national park and partnering communities. Communities that are involved in conservation partnership cooperation are obliged, in conjunction with the TNLL Center, to maintain the national park area and must also fulfill a number of other requirements that are set out within the cooperation agreement, including increasing human resources in order to support the management of the Lore Lindu National Park and efforts towards biodiversity conservation, maintaining facilitation in order to support the utilization of non-timber forest products, traditional cultivation, the utilisation of aquatic resources in relation to unprotected species and limited natural tourism.

At the present time, the National Park is required to provide direction to and supervise various technical activities, as well as carry out monitoring and evaluations in relation to the activities that are listed under the cooperation agreement. Monitoring processes should aim to determine development and progress, as well as identify problems and formulate solutions in relation to the implementation of community conservation partnerships. As a part of this monitoring regime, the management of the Lore Lindu National Park organized a recent evaluation meeting in order to assess the progress of the community conservation agreement. This meeting was held in the Regency of Sigi in Central Sulawesi between 2 - 3 June 2022.

The evaluation was carried out over a period of two days and the results revealed that the management of the LPKD, though still very much operational, was not currently as active as it had been when assistance had previously been provided. In this regard, management changes had been made to the LPKD in North Pakuli, Simoro and Lawua. Moreover, while some of the equipment possessed by the LPKD was still being used, the condition of others was unknown. In addition, some of the nurseries had been damaged and had not functioned since the seeds had originally been distributed to LPKD members and other communities. However, one success story is the Cinta Lingkungan LPKD, which is located in the village of Simoro and which has planted various types of forestry plants along with seasonal crops as part of its LPKD-related operations.

Ultimately, several recommendations were made in addition to the extension of several PKS that had come to an end, including: improving coordination and cooperation with various parties in order to promote products/multi-businesses and their marketing; Meanwhile, more meetings are required as part of the mentoring of the managements of several businesses, as well as to strengthen the capacities of LPKD members and their institutions while improving access and infrastructure in order to support multi-business activities.

The results of the evaluation will be reported to the Head of the Lore Lindu National Park Office and will be used as a reference during the drawing up of a community empowerment master plan for the area lying around the Lore Lindu National Park in accordance with Regulation of the Director-General of Natural Resources and Ecosystem Conservation Number P.6/KSDAE/SET/Kum.1/ 6/2018 on Technical Guidelines for Conservation Partnerships in Nature Reserves and Nature Conservation Areas.