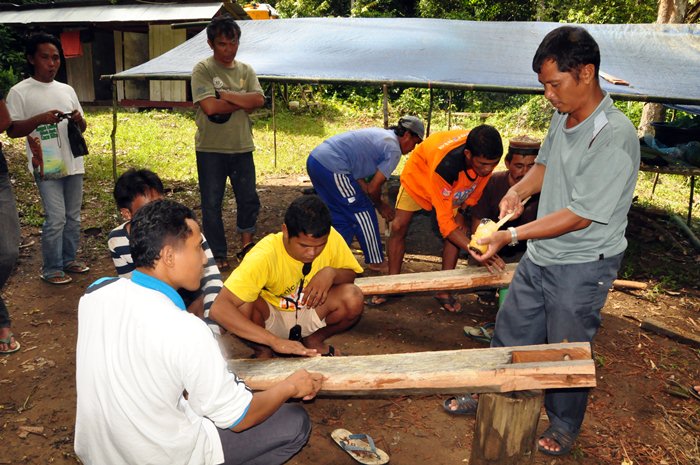 Berau regency is famous for its high quality and quantity of wild honey. However, due to increasing forest conversion for plantations and deforestation, concerns are increasing that the honey production will decrease or even disappear in the future. Therefore, on 26-28 November 2012, the Berau District Forest Service together with The Nature Conservancy (TNC), GIZ FORCLIME, the local NGO Nemdoh Nemdung and the community of Kelay Sub-district conducted a training on Sustainable Harvesting of Wild Honey. The event was attended by community representatives from 6 villages located close to West Berau Forest Management Unit, namely Duhung Long, Long Lanuk, Lesan Dayak, Merabu, Panaan and Merapun villages.

GIZ FORCLIME facilitated the training through providing resource persons from West Kalimantan: a trainer in forest honey harvesting from the Pontianak-based NGO KABAN and a wild honey farmer from the Periau Association of Lake Sentarum (APDS). During the training, participants were introduced to a new method for making artificial beehives called tikung which are popular in Lake Sentarum. A Tikung is an artificial honeycomb made of wood and placed on the tree, but not too high, so that harvesting the honey becomes easier than with the natural hives located high up in the trees. Materials for making the artificial hives are easy to get and they are not too difficult to make. In addition to making and installing tikung, participants also obtained knowledge and information on sustainable harvesting, packaging of harvested honey, and marketing wild honey.

With the technology transfer gained through the training in Kelay local communities will be able to make a real breakthrough with the utilisation of this Non-Timber-Forest-Product. For generations they have harvested the wild honey from a height of 40-70 meters with minimum safety devices, consequently, wild honey harvesting has been a very dangerous business for them. Encouraged by the training villagers were now keen to try the new technique hoping that the bees will accept the artificial hives.

After the training, participants developed follow-up plans, such as (1) Making 10-15 tikung to be installed at their respective villages, (2) Establishing honeybee farmer groups to facilitate coordination between villages, (3) Coordinating with the District Forestry Service for obtaining support for further development. The participants also agreed to meet again in February 2013 to evaluate their action plan. 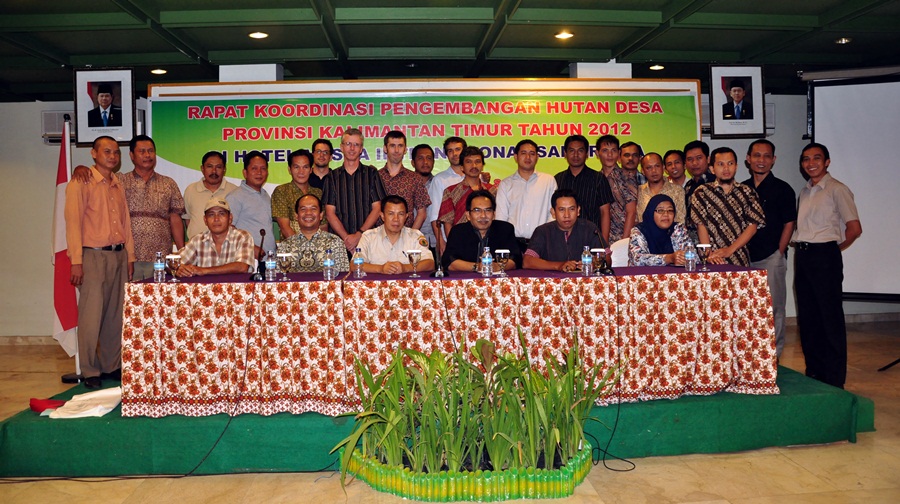 Governmental and non-governmental stakeholders active in the development of community-based forest management in East Kalimantan met in Samarinda on 20-21 November 2012 to exchange experiences, coordinate their efforts and to decide on next steps. The Coordination Meeting on Village Forest Development and Workshop on Indicative Mapping of Village Forest Areas was a collaborative effort between the Watershed Management Agency (DAS BP) Berau Mahakam, GIZ FORCLIME and Kawal Borneo Community Foundation (KBCF). The event was attended by 65 representatives from the Province and District Forestry Services in East Kalimantan, Technical Implementation Units (UPT) of the Ministry of Forestry, Non Governmental Organizations (NGOs), and sub-district and community representatives from several villages in East Kalimantan.

Village Forest, as one of several government-sponsored community-based forest management schemes, is still in its early stages of development in East Kalimantan. Up to now there are two villages whose proposals have been verified by the Ministry of Forestry for permission of village forest management. The verified villages are Long Bentuk (East Kutai) with an area of 800 hectares facilitated by the KBCF, and Setulang (Malinau) which covers 5,314 hectares facilitated by GIZ FORCLIME. Additionally, WWF has proposed an area of 52,000 hectares in West Kutai to be allocated for community based forest management activities.

One important issue and challenge for further progress raised during the Village Forest Coordination Meeting is the local governments’ limited support in developing conducive policies. In addition, limited availability of facilitators is also a main problem in the forest village development processes. Prof. Dr. Ir. San Afri Awang, Special Adviser on Inter-institutional relations to the Minister of Forestry,  and Dr. Ir. Haryadi Himawan, Director of Social Forestry of the Ministry of Forestry, made a commitment to carry out a roadshow in East Kalimantan districts to encourage the local governments to provide their support to Village Forest development.

Mono Cable Winch and Emission Reduction in the Forestry Sector 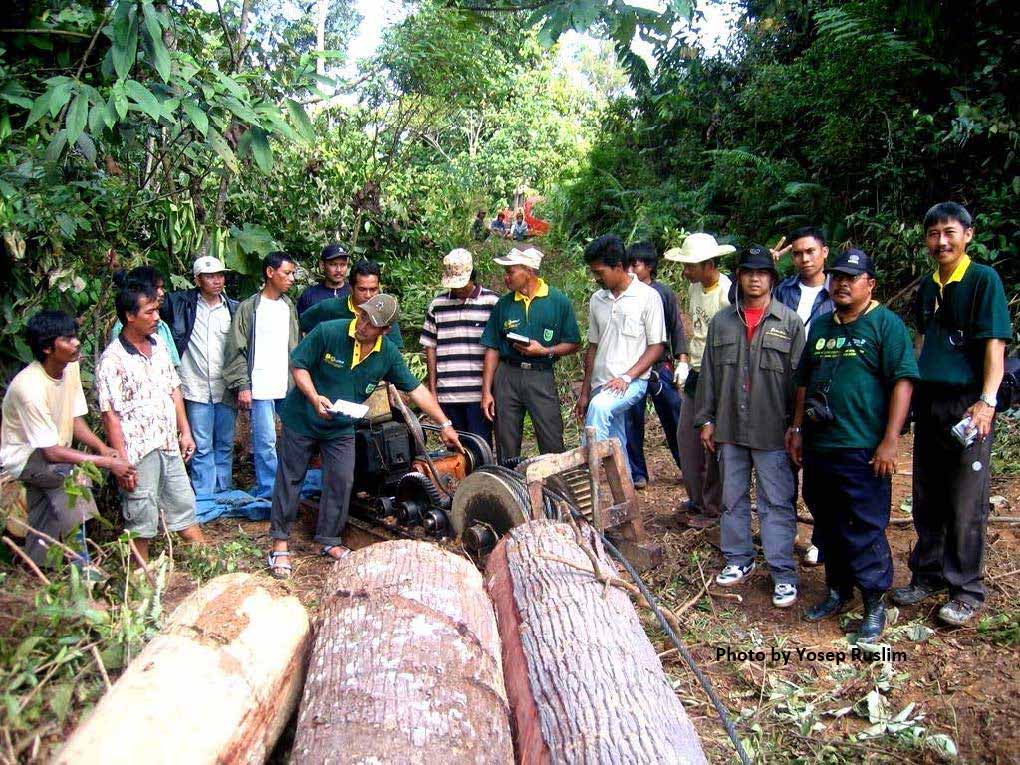 The Ministry of Forestry together with FORCLIME held a Focus Group Discussion (FGD) on "Refining a Guideline for the use of the Mono Cable Winch (MCW)” on 14 November 2012. The purpose of the discussion was to finalize the MCW guideline, to increase understanding of the Mono Cable Winch harvesting system, to integrate the use of MCW into forestry policy and increase the ministry’s awareness of the need for a policy on the implementation of MCW as well as to explore ways of making the policy attractive to be implemented.

Dr. Yosep Ruslim from Mulawarman University gave a presentation on “Understanding the Harvesting System using Monocable Winch, its policy and relation to emissions reduction”. The FGD was attended by 23 technical staff from the Ministry of Forestry, The Nature Conservancy (TNC), GIZ-FORCLIME, the forest concession holders association (Asosiasi Pengusaha Hutan Indonesia – APHI) and representatives from forest concessionaires that already have some experience with MCW.

The presenter explained that MCW is one of the tools for Reduced Impact Logging (RIL) since it reduces negative impacts of log skidding. The use of MCW can contribute to reducing carbon emissions, because forest degradation will be reduced and less fossil fuel is used per cubic metre of timber removed. The equipment can be produced domestically with a relatively low price (around Rp. 50 million). Participants discussed ways in which MCW should be promoted in natural forest concessions as part of the overall silvicultural system and improved forest harvesting planning.
The challenges encountered in the application of these tools are that the operators are not accustomed to using the tools and that MCW equipment in the field is often associated with illegal logging.

The FGD participants agreed that a decree at the level of the Director General would be issued as a legal basis and regulatory support. Participants proposed to explore incentives for the use of MCW such as fiscal policy incentives or a price premium reward. Finally, the FGD also reached a decision to review Reduced Impact Logging (RIL) comprehensively in the future.