The Indonesian Ministry of Forestry hosted the 8th Annual MegaFlorestais Meeting about “The Architecture of Forest Governance in the 21st Century”, in cooperation with the Rights and Resource Initiative. The meeting was held in Nusa Dua, Bali from 21st – 25th of October 2013. Participants came from various countries such as Brazil, China, Cameroon, Canada, Democratic Republic of the Congo, Indonesia, Mexico, Myanmar, Peru, Republic of Korea, Sweden, and the United States of America. The Director General of Forestry Planning,  Mr. Bambang Soepijanto, on behalf of the Minister of Forestry opened the meeting with the Minister’s keynote speech.

As part of its support to the Directorate of Area Management and Preparation of Forest Area Utilization (WP3H) for Forest Management Unit (FMU) development, FORCLIME, together with WP3H, presented the programme’s publications and interactive map on Model FMUs and FORCLIME activities in Indonesia to participants of the MegaFlorestais event.

To support the development of Forest Management Units (FMU), the Ministry of Forestry through the Centre of Forest Education and Training (CFET) and the Directorate of Area Management and Preparation of Forest Area Utilization (Direktorat Wilayah Pengelolaan dan Penyiapan Areal Pemanfaatan Kawasan Hutan – WP3H) conducted a training in Bogor for candidates of Head of FMUs. The entire training takes 60 days from 3 September to 1 November 2013, and the first seminar in Bogor was attended by 30 participants from different regions in Indonesia.

Special focus was put on the topic of “entrepreneurship” as one of the tasks that have to be developed by the Heads of FMUs when managing their forest area. For most government officials in the forestry sector the topic of entrepreneurship is a new issue as before they had often focussed more on formulating and implementing regulations, or facilitating and providing technical assistance. For delivering these new competences on entrepreneurship, FORCLIME provided experts including Dr. Bambang Subagjo and Dra. Ken Sitawati Utami MM, who work in tandem with lectures from CFET such as Ir. Arifah Prihartini MSc. The following material was discussed during the training in Bogor: introduction of entrepreneurship, the characteristics of entrepreneurship, the business canvas model (9 aspects to be considered in developing business), business feasibility, and networking and promotion of development and business investment. The training also discussed some case studies of business development in the forestry sector, such as rubber wood utilization in West Kalimantan, clean water utilization from the forest and managing eco-tourism in Sabah, Malaysia. 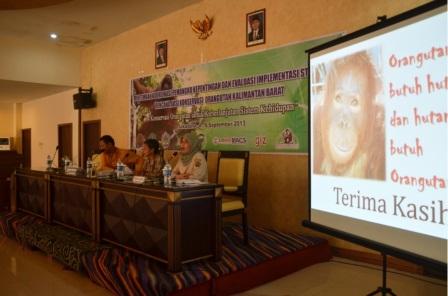 Together with the Indonesian Orangutan Conservation Forum (FORINA) and the Natural Resources Conservation Agency (Balai Konservasi Sumber Daya Alam – BKSDA) of West Kalimantan, FORCLIME facilitated a coordination meeting between parties involved in the protection of orangutans in Kalimantan. The meeting was held in early September 2013 in Sukadana, North Kayong District, West Kalimantan.

The results of the coordination meeting will be used as inputs of the meeting proceeding.