Training on Mapping Conflicts for Lecturers at the CFET 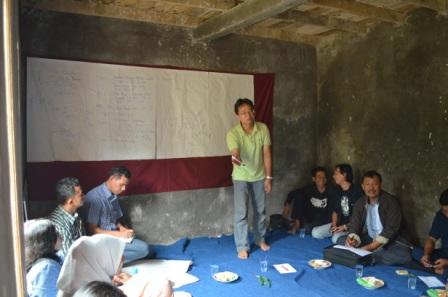 The Centre of Forestry Education and Training (CFET) in collaboration with the Forestry Tenure Working Group (WG Tenure) and supported by GIZ FORCLIME conducted a training on “Conflict Mapping” in Bogor. Participants in the training were mainly lecturers from the CFET and the regional Forestry Training Centres (BDK Siantar, Pekanbaru, Bogor, Kadipaten, Samarinda, Makassar, Kupang).

The objective of the training was to provide knowledge, skills and mind-sets to stakeholders on conflict mapping, analysis of conflict resolution, and documentation of data. After the training participants are expected to use their newly acquired knowledge in teaching as well as direct resolution of tenure conflicts in the forestry sector.

As part of the training, a field trip enabled the participants to apply the theoretical knowledge obtained during the class room sessions. The exercise in the field was carried out at Kiarasari village in Sukajaya sub-district in Bogor. The village is located in the surrounding area of the Gunung Halimun Salak National Park. Participants used analytical tools on land tenure conflict mapping for collecting data and information from the community in the Cibuluh and Gunung Leutik villages, and the management of the national park.

Working closely with CFET and supported by FORCLIME, the WG Tenure has developed a curriculum syllabus on “Conflict Mapping”, which has already been formalized through the Head of CFET’s decree No. 35/Dik.2/2014. Four analytical approaches for assessing land tenure have been adopted in the curriculum syllabus, namely Rapid Land Tenure Assessment (RaTA), Disputants Style Analysis (AGATA), gender analysis in the management of forest resources, and documentation of data conflicts (HUMA -win).

FORCLIME, in collaboration with Pushumas, the public relations department of the Indonesian Ministry of Forestry, participated in the 6th IndoGreen Forestry EXPO from 11 – 14 of April 2014. The expo, which took place in the Jakarta Convention Centre, was organised under the theme “Low Carbon Economic Forestry Development” and was opened by the Forestry Minister on April 11th. It is estimated that about 10,000 visitors - among them high school pupils, university students, government officials and retirees - came to the expo to inform themselves about the activities conducted by the various exhibitors which came mainly from forestry government institutions, private companies, and other forest related organisations, both national and international.

One of the special features of the FORCLIME booth was its interactive touch screen which, based on interactive maps, provided information on FORCLIME‘s field work in Kalimantan (Malinau, Berau and Kapuas Hulu districts). This touch screen attracted many visitors and was a good starting point for lively interaction and discussions with FORCLIME staff.

In addition to the booths, talk shows were held inside the expo hall every day. Topics included climate change, forestry, sustainable mining, forestry products, and green products. The FORCLIME talk show was moderated by Mohamad Rayan and Klothilde Sikun with title “Forests and Climate Change”. The interested audience asked many questions on various topics, such as the programme’s activities, its motive and contribution to protecting the remaining forests in Indonesian, but also more general questions on REDD+, climate change, sustainable forest management, illegal logging, biodiversity, economic development and forests, or international climate change conventions.

For the purpose of promoting ‘South-South’ cooperation, GIZ FORCLIME facilitated a visit to Brazil for forestry officials from the Indonesian Ministry of Forestry and from Berau regency. In Brazil, the Indonesian forestry experts had a dialogue with various institutions in four cities in Brazil, such as Brasilia, Belem, Rio de Janeiro and Sao Paulo on prominent issues and developments in the Indonesian and Brazilian forestry sector.

After a courtesy visit to the Indonesian Ambassador to Brazil, Sudaryomo Hartosudarmo, the delegation continued to the Brazilian Forestry Service (SFB), the ‘main host’ in the city of Brasilia, where they were received by the Director General of Forestry, Marcus Vinicius Alves da Silva, PhD. The SFB is a federal agency that handles forestry in Brazil under the Ministry of Environment (MMA).
Visits to other institutions followed, such as IPAM (Amazon Environmental Institute) and ICMBIO (an agency under the MMA which is responsible for the conservation and management of protected areas in Brazil) on national level, and to SEMA (State Environmental Agency of Pará) and IDEFLOR (Forestry Institute for Development) which are responsible for forest concessions in the State of Pará. In the timber concession Ebata the Indonesian team got insights into the company’s planting (3,000 ha), harvesting (6,000 ha) and wood-processing activities (flooring products, docking and panels).
In Rio de Janeiro the delegation visited the BNDES (Banco Nacional de Desenvolvimento Economico e Social), a development bank which also manages climate change related funds for the Amazon, e.g. from the Norwegian Government, German KfW or Brazilian oil companies.
As a last stop, the Indonesian officials visited the IPEF (Forestry Science Institute) in Sao Paulo which works together with the University of Sao Paulo and conducts research on, for instance, the productivity of pine and eucalyptus (average of 45 m3/ha/year).

From the visit to Brazil, the officials from the Ministry of Forestry and Berau district government obtained information on forest management practices in Brazil, particularly the management of concessions and plantation forests, as well as fund management related to climate change. These issues have the potential for further cooperation between and two countries and shall be followed up with visits for working level staff.