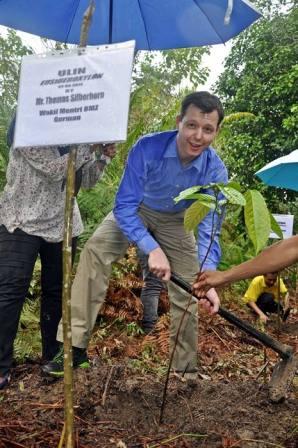 From 2nd- 4th of April 2014, Thomas Silberhorn, State Secretary of the German Ministry for Economic Cooperation and Development (BMZ), visited Berau to get firsthand information about FORCLIME’s activities at the local level. The regent of Berau received Mr. Silberhorn and his delegation at the airport with a special welcome ceremony based on traditional Dayak customs and for an official dinner at his house in Tanjung Redeb.

During the following two days, the State Secretary visited the village Batu Rajang and the timber concession Inhutani I. The villagers of Batu Rajang welcomed Mr. Silberhorn with a traditional ceremony. Discussions with local stakeholders focused on the relationship between the timber concession and the villagers. Part of the programme was also the presentation of FORCLIME’s activities in Berau which support forest administration reforms as well as REDD+ Demonstration Activities (DA) and livelihood improvement in selected locations of the Forest Management Unit.

A visit to the Borneo Orangutan Survival Foundation (BOS) in Samboja, including tree planting by the State Minister and members of his delegation, was the highlight of the last day of the official visit in East Kalimantan. The State Secretary expressed his gratitude to the team of FORCLIME for the excellent work, in particular to the dedicated achievements of FORCLIME’s Development Advisors at the district level.