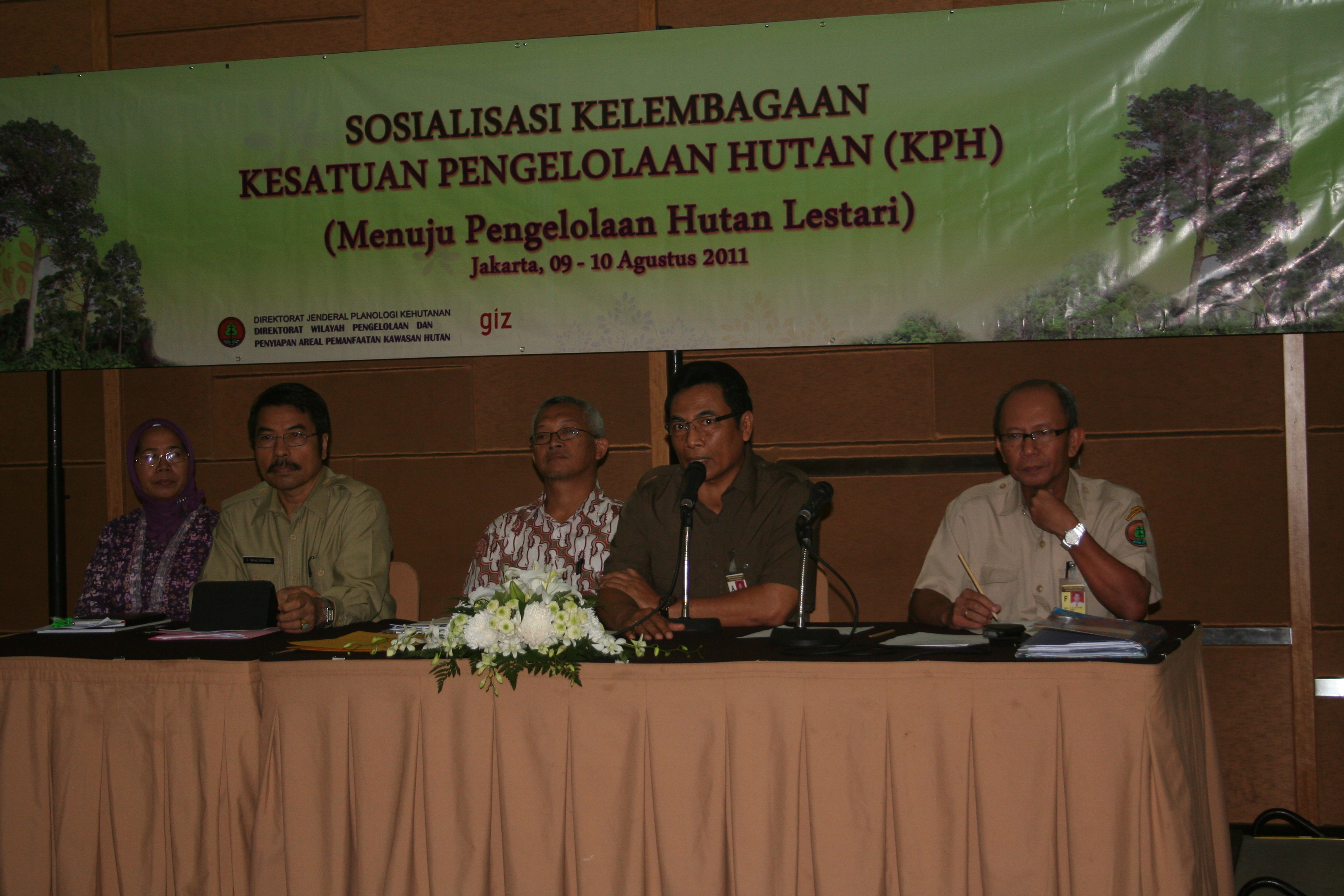 On 9-10 August 2011 at Santika Hotel Jakarta, the Ministry of Forestry with support from GIZ-FORCLIME hosted a Workshop on the Institutionalization of Forest Management Units (FMU). The event was attended by 36 District Secretaries and Heads of Technical Units for Forest Planning in related provinces. The purpose of this event was to encourage decision-makers in the regions to commit to establishing FMU institutions so that the Ministry’s target of KPH development can be achieved. The intended target is to have 60 Model FMUs institutionalised by 2012, which is part of the wider  target of having 120 FMUs operational by 2014.

The Director General of Forestry Planning, Ir. Bambang Soepijanto, MM., in his opening speech expressed his wish for the meeting to encourage a two-way communication. Information about challenges faced in the regions should be expressed, so that they later can be raised as evaluation issues for the Ministry of Forestry in the context of FMU development.

The first presentation by the Head of Organization in the Ministry of Home Affairs, Galingging, explained that FMUs will have the form of “regional working units” (Satuan Kerja Perangkat Daerah, SKPD) according to the Minister of Home Affairs Regulation No. 61/2010. Furthermore, the Director of Forestry and Water Resources at BAPPENAS, Basah Hernowo, confirmed FMU development to be a National Priority. He stressed the role of FMUs for asset management for the regions in the context of sustainable forest management and as a source of local economic development. The Head of the Forestry Service of West Nusa Tenggara, Ir. Hartina, shared her knowledge and experience related to forest management in the FMU in West Rinjani. She experienced that interaction and collaboration of the FMU with local companies such as for firewood production, or for tourist activities, management of micro hydro electric power or water supply companies, but also with Partnership Forests (HKm) and others will provide direct benefits in the form of new employment opportunities, which also means increased income.

At the end of the presentation session, the Director of Preparation of Area Management and Preparation of Forest Area Utilisation of the Forestry Ministry presented the progress of FMU development at the national level and explained the conditions for receiving support from the Central Government which are linked to the status of the FMU to be established as “Model FMU”.

During the meeting, the discussion which was led by the Senior Advisor to the Minister for Relations between Institutions, Ir. Made Subadia Gelgel, MSc., was open and dynamic, so that participants could openly express their thoughts and problematics.

Prior to the closing session, the meeting concluded with an important part of the event, namely Coordination and Consolidation of the Facilitation Plan for FMU Development in the Region. In this session 31 out of 36 District Secretaries or district representatives, committed to immediately follow up with establishing FMU institutions and develop them into Model FMUs. Therefore, provision of support from the Central Government to 60 FMUs in 2012 is expected to run smoothly.