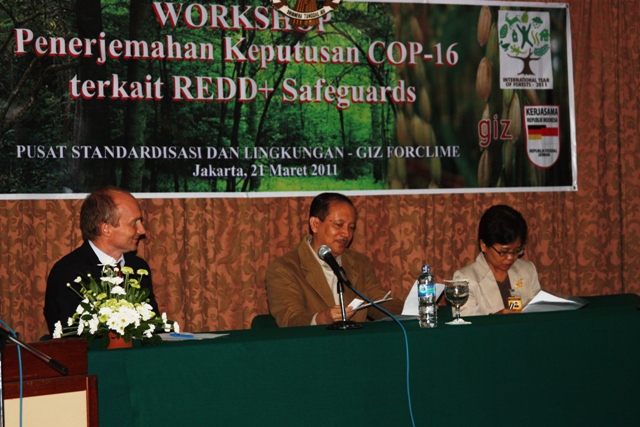 On 21 March the Ministry of Forestry supported by the FORCLIME Programme conducted a workshop on REDD+ Safeguards as a follow-up to the UNFCCC COP 16 Decision. The workshop was opened by the Secretary General, Dr. Hadi Daryanto, and the Head of Development Cooperation of the Embassy of the Federal Republic of Germany, Mr. Andreas Beckermann.

The objective of the workshop was twofold: On the one hand it aimed at collecting ideas on how the REDD+ social, environmental as well as rights- and governance-related safeguards mentioned in the COP 16 Decision can be translated into the national context. On the other hand its purpose was to identify elements which need to be monitored as part of a national information system on REDD+ safeguards as stipulated in the decision.

About 100 participants from central and regional government, private sector, CSOs and NGOs, academia and international partners learned about instruments and procedures already in use as safeguards in forest and land management in Indonesia ranging from AMDAL to social safeguards contained in the legal framework. In the afternoon session their relevance, strengths and weaknesses with regard to REDD+ were discussed and elements identified which are needed for measuring and monitoring their implementation. The workshop will be followed up by further steps to develop an information system on REDD+ safeguards, to be taken by the Ministry’s Center for Standardisation and Environment supported by FORCLIME and involving further public consultations, so as to provide input into the deliberations of the parties to the UNFCCC at the international level.