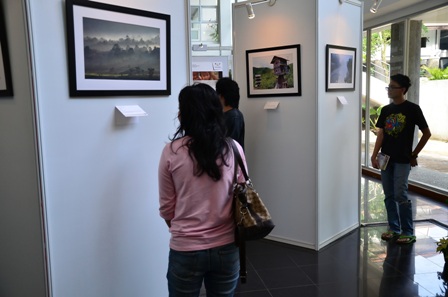 In order to raise awareness about forests and climate change and to contribute to the success of JERIN, a German-Indonesian expo and cultural events series titled “creativity in diversity” FORCLIME organised a number of attractive side events to the expo which has been touring the country since October last year.

One of FORCLIME’s contributions to the JERIN events was FORCLIME’s Online Photo Contest 2011 that was completed successfully, with over 2600 photographs submitted. Prizes for the winners were handed over by the German Ambassador and the Minister of Forestry represented by the Secretary General of the Ministry of Forestry. The winning and runner-up photos were displayed at an exhibition from 15 to 23 December 2011 at the Ministry of Forestry in Jakarta.
When the JERIN expo was held in Samarinda, the FORCLIME photo exhibition travelled on to Samarinda and was shown with great success at the Provincial Public Library from 13 to 17 February 2012. During the event, FORCLIME conducted a number of side events, such as a discussion on forests and climate change for students in Samarinda and a drawing competition for kindergarten children, which both took place on 15 February. The drawing competition aimed to raise awareness on forests and climate change at the early age. It was conducted in collaboration with the local environmental NGO - Jaringan Pendidikan Lingkungan Hidup Kaltim (JPL Kaltim) and the Forestry Service of East Kalimantan.

Recently JERIN was hosted by the Bandung Institute of Technology (ITB), where FORCLIME presented the winning photos of the FORCLIME Photo Contest 2011 and discussed about forests and climate change with visitors to the expo.

About JERIN
JERIN is an interactive project platform open for your involvement. The project covers events ranging from culture to business, from science to education, from politics to the environment.
JERIN is taking place from October 2011 to June 2012 in several cities including Medan, Jakarta, Bandung, Makassar, Yogyakarta, Surabaya, Denpasar, Semarang, Banda Aceh, Malang, Mataram, Padang, Samarinda, Surakarta (Solo).
More information about JERIN http://jerin.or.id/