Engaging students in discussions about climate change and REDD+ 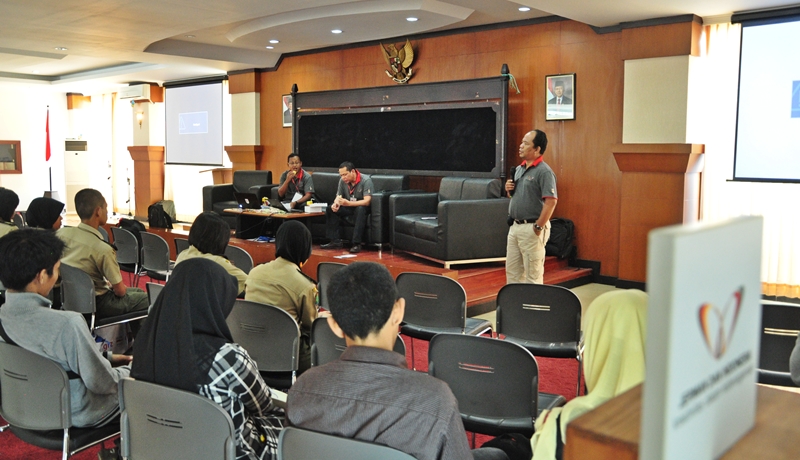 At the Germany-Indonesia (JERIN) Expo which has been touring the country since October 2011 and was hosted by Samarinda from 13 to 17 February FORCLIME invited students from the Forestry Vocational High School and the public of Samarinda to discuss the issues of climate change and REDD+. The discussion took place at the Public Library of East Kalimantan on 15 February and was attended by 50 highly enthusiastic participants. As an introduction FORCLIME experts provided some explanations about the causes and impacts of climate change, international agreements and efforts in climate change mitigation through REDD+. They also talked about efforts which everyone can do individually. In the ensuing lively discussion the students asked critical questions, such as about the inconsistency of government policies for emission reduction given that there are still forest conversions for mining exploitation and oil palm, lack of commitment from the developed countries like the USA who refused to ratify the Kyoto Protocol, weak supervision and law enforcement in the forestry sector, etc.

The students also contributed their own experience with climate change mitigation activities:

I am proud that my friends and I have made use of air conditioning waste water, which contains a lot of methane gas, for cultivating oyster mushrooms. Our experience in developing oyster mushroom cultivation awarded us the first prize of the Scientific Writing Competition of the Forestry Schools in Indonesia. Waste water from AC appliances which contains greenhouse gas elements can be utilized for something productive.
(Ije, student of the Forestry High School in Samarinda)

In fact, from the comments of participants we learned that there are many efforts to improve environmental quality and emission reductions which are initiated by the community. Therefore, in order to protect the environment it is necessary to improve governance both at the level of government administration, but also by promoting community participation in such efforts. This is in line with the principles of 3S, namely: Starting from yourself, Starting from small actions, Starting right now...

The Germany-Indonesia (JERIN) Expo will be in Bandung from 12 -16 March at the ITB Campus Centre for its last display. It will be accompanied by a photo exhibition on forests provided by FORCLIME.