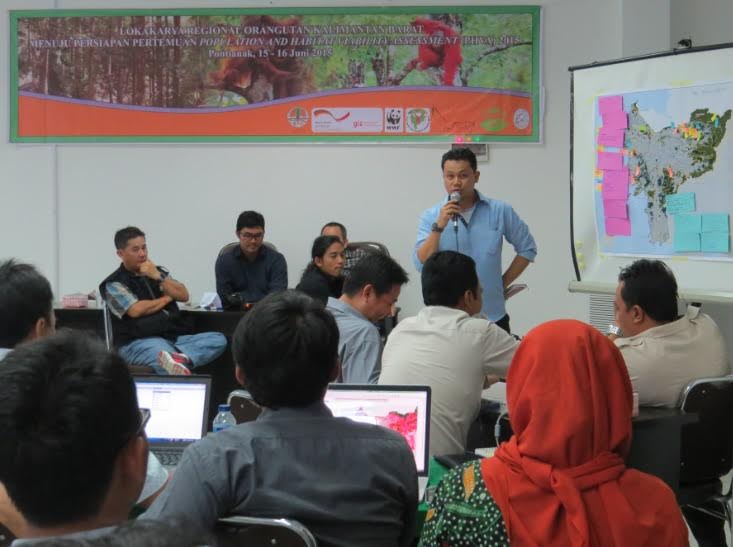 The Conservation and Natural Resources Agency (BKSDA) of West Kalimantan in collaboration with partner organizations such as FOKKAB (West Kalimantan Orangutan Conservation Forum), FORINA (Indonesian Orangutan Forum), WWF-Indonesia, GIZ FORCLIME, AKAR, and Titian Foundation, conducted a “Regional Workshop Kalimantan” on 15-16 June 2015. The objective of the meeting was to share information on orangutan distribution, population, and conservation efforts in West Kalimantan. It was conducted as a preparatory step to an upcoming “Population and Habitat Viability Assessment (PHVA)” that will be held in August 2015.

The Head of BKSDA West Kalimantan, Sustyo Iriyono, emphasised the importance of constant review and evaluation by experts and the government concerning orangutan matters in the province. "There is so much data available about orangutans which we have been collecting from 2004 until now. This data needs to be updated to ensure accuracy, " stated Sulistyo. The data and information to update the existing PHVA analysis on the distribution of orangutan populations and habitat viability derive from reports and scientific papers and are considered valuable inputs.

According to the Chairman of FOKKAB, Albertus Tjiu, "the results of this update will be submitted to the government as the responsible agency for protecting the endangered species of great apes". Eventually, this data will be used by the Government of Indonesia as a baseline to update the strategy and action plan for orangutan conservation in Indonesia that will be concluded in 2017.