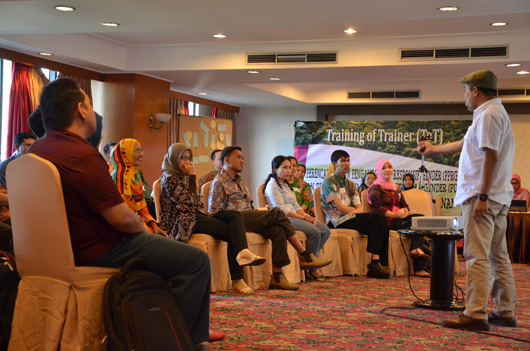 With the aim of increasing and strengthening human resource capacities within the Ministry of Environment and Forestry (MoEF), the Working Group (WG) of Gender Mainstreaming of the MoEF and FORCLIME conducted aTraining of Trainers (ToT) on gender responsive planning, budgeting and facilitation. Participants of the training, which took place from 23-26 February 2016 in Jakarta, were focal points from Gender Mainstreaming WG, the MoEF Province Models (East Nusa Tenggara and West Sumatra), FORCLIME Demonstration Activities and the District Program Management Unit of FORCLIME Financial Cooperation.

On the first day, participants learned about the concept of gender equality and experiences from province models. Steps on gender responsive planning and budgeting were presented during the second day, along with group exercises. On day three, the participants were received an introduction to moderation and facilitation techniques for gender issues, and final day consisted of training on micro-teaching and futher group work.

The ToT was conducted succesfully. Afterwards, many participants expressed their expectation to have more such training to increase the number of  skilled facilitators for gender issues.