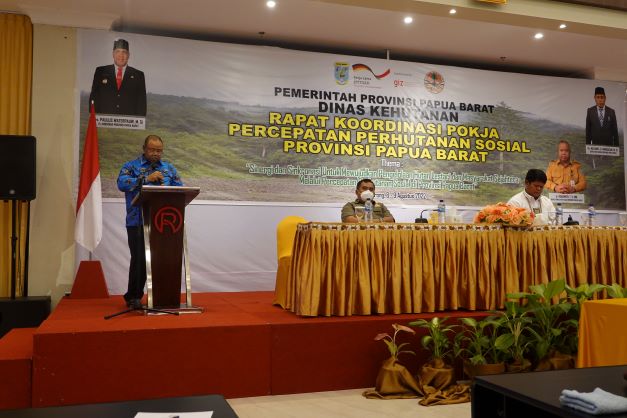 With the aim of accelerating the social forestry programme within the province of West Papua, the Papua Provincial Forestry Service, supported by FORCLIME, held a coordination meeting on 8 - 9 August 2022 in Sorong City. The meeting was opened by the Governor’s Expert Member of Staff for Development Economics, Dr. Niko U. Tike, SE.MM, and the 100 attendees included representatives from various government agencies, NGOs and development partners of West Papua Province, as well as a number of academics. During the meeting, the Head of the West Papua Province Forestry Service, Ir. Runaweri F.H, MM., announced that the purpose of the coordination meeting was to coordinate and synergize recent developments in social forestry within the province of West Papua, as well as to affirm the support of West Papua Development Partners regarding the implementation of the Social Forestry Work Programme in West Papua.

During the meeting, various issues were discussed, including the permit schemes that have already been introduced. In West Papua Province, only two social forestry permit schemes have been introduced, specifically the village forest scheme (73 permits issued) and the community forestry scheme (nine permits issued). Also discussed during the meeting was the availability of facilitators. In this regard, of the 22 facilitators that have already been approved, only 17 are currently available out in the field. Said facilitators have been drawn from various communities and some of them have been unable to work at full capacity as a result of other responsibilities, while capacities themselves differ. In addition, the meeting also discussed the involvement of relevant agencies in the development of social forestry, for example, through Forest Management Units.

Various suggestions emerged during the discussions that took place during the meeting, including the seeking of synergy between agencies and facilitators, as well as other facilitators from other ministries (e.g. the Ministry for the Acceleration of Village Development).

Another suggestion that was made during the meeting was a proposal to increase the capacities of facilitators so that they all possess more or less the same competencies. As a result of this suggestion, FORCLIME is planning to hold a Training Needs Assessment (TNA) session for facilitators in order to create a training concept that best fits their needs.