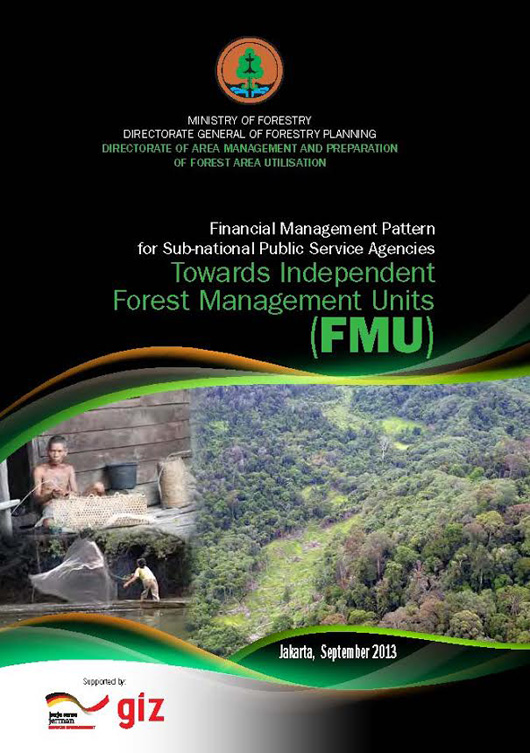 FMUs need to fulfill certain requirements to be operational (as stipulated in Provision 6/2007). One requirement is to develop investments that support achieving the objective of sustainable forest management. Hence, FMUs must have an adequate financial management system in place, in addition to already existing budgeting systems under the national and sub-national government framework (APBN or APBD).

FORCLIME has been supporting this process of implementing financial management systems for Forest Management Units in Indonesia for several years already, in particular together the Forest Management Unit Gularaya in Southeast Sulawesi Province. With the help of FORCLIME’s facilitation and guidance, several milestones could be achieved.

The first milestone: In early 2012, FORCLIME funded a study entitled Policy concept of investment and financial management system for Forest Management Units (FMU). The study was conducted by a team of consultants with diverse expertise in forestry as well as in public administration and finance, and was completed in August 2012. (The consultant team consisted of: Bramasto Nugroho; Sudarsono Soedomo; Handra Hefrizal; Agus Setyarso; Guido Kartodihardjo; Ali Djajono)

The third milestone: FORCLIME initiated a trial for the implementation of PPK-BLUD in the Gularaya Production FMU, Southeast Sulawesi Province. The trial started in June 2013.

The activities conducted are:

The fifth milestone: A major success was the issuance of the Southeast Sulawesi Governor Decree 636/2014 on the establishment of a PPK-BLUD Assessment Team for FMU Gularaya, dated November 11, 2014.

The sixth milestone: As a result of facilitating the trial for PPK-BLUD implementation at GularayaProduction FMU, several local government regulations were issued:

The seventh milestone, or latest achievement in 2016 supported by FORCLIME, is the provision of the PPK-BLUD Guidance – Towards Independent FMUs (2nd edition). Improvements have been made to the 1st edition, with the new guidance now including necessary templates for the implementation of PPK-BLUD at FMU level. This guidance may assist FMU managers in Indonesia to learn from the approach taken in FMU Gularaya and implement it in their own FMUs.