FORCLIME provides advice to the Directorate General of Natural Resources and Ecosystem Conservation (KSDAE) of the Indonesian Ministry of Environment and Forestry, on the development of non-national park Conservation Forest Management Units (CFMU).
One product of this collaboration is a guidance for the “Design and Operational Management of CFMUs” (Rancang Bangun dan Operasional Pengelolaan KPHK). The document, which was completed in 2015, outlines the planning and preparatory steps for CFMU establishment as follows:

First, a buffering technique based on proximity and adjacency, as well as geographical and ecological aspects is used for the determination of a new CFMU. Later on, key conservation areas are being identified through the Expert Judgment method, the core for delineation of the proposed management unit.
Other products resulting from the collaboration, are “Technical Operational Guidelines for Conservation Forest Management Units” (Petunjuk Teknis Operasional Kesatuan Pengelolaan Hutan Konservasi), or “Standards, Criteria and Procedures for CFMU Development” (currently in process).
Moreover, FORCLIME will promote these findings to be formalized in a Ministerial Regulation on CFMU development outside national parks, issued by the Ministry of Environment and Forestry.

Based on Law No. 41 of 1999 concerning Forestry, conservation forest consists of forest sanctuaries (Strict Nature Reserve and Wildlife Reserve) and nature conservation forests (National Park, Grand Forest Park and Nature Tourism Park, including Hunting Park). Currently, existing national parks are being managed by special management units, known as National Park Offices (Balai and Balai Besar), or Grand Forest Parks which are under national or provincial governments. All other protected areas are managed by Nature Conservation Offices (Balai and Balai Besar) on provincial level. This different administration levels and institutions have led to a lack of effective management, especially in non-national park conservation areas on site level. In order to improve the sustainable management of forests, the establishment of Forest Management Units (FMU) is important for strengthening the implementation of forest management on site level. Hence, all forestland, including conservation forest shall be managed by special management unit based on its function. Therefore, the conservation areas and their current management of shall be transformed into CFMU as an area/cluster and a management unit (organization). 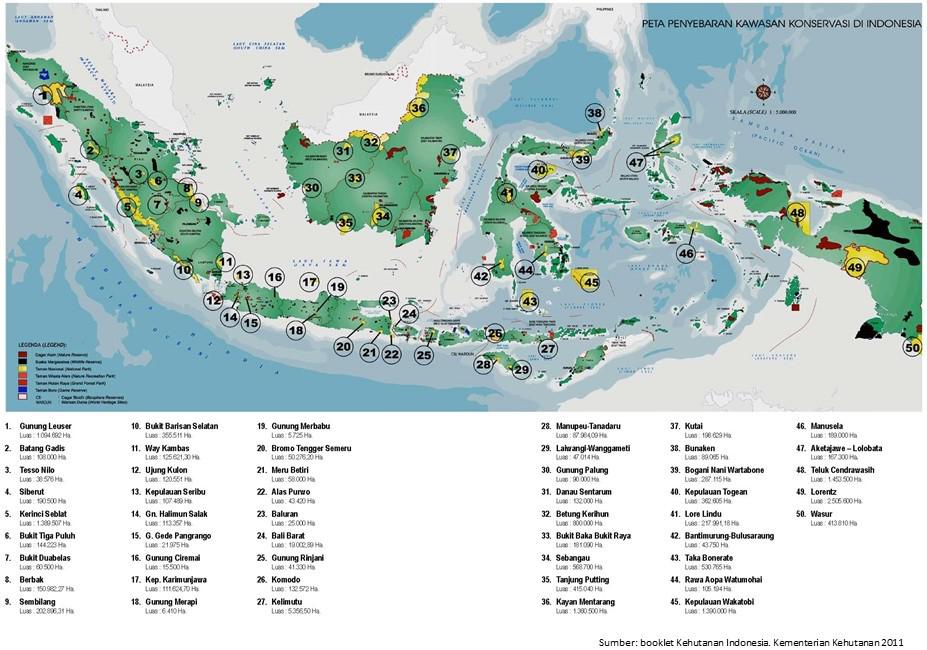 The establishment of conservation areas (CA) in Indonesia dates back to the Dutch Colonial Government which designated parts of Indonesian forests as “natuurmonumenten” (nature monument) or “wildreservaat” (wildlife reserve) under an East Indie Governor General decree. The purpose of preserving the forest included research and protection of nature and wild animal habitats, especially big mammals, birds and other attractive animals. There were areas managed by Forestry Offices (Onder het beheer van den Dienst van het Boschwezen) such as botanical reserves or the State Botanical Garden Bogor (Onder het beheer van den Directeur’s Land Paltentuin te Buitenzorg), and others managed by private sector (Onder het beheer door Particulieren) such as nature monuments. These areas were designated as nature reserves (natuurmonumenten) based on Nature Monument Law No. 278 of 18 March 1916 (Natuurmonumenten Ordonantie, Staatsblad van Nederlandch – Indie No. 278, 1916)1. In addition, many areas were designated as wildlife reserves (wildreservaat) to protect animal species which were threatened due to excessive hunting for hobby and beauty. The situation lead to restrictions of hunting activities through the enactment of Hunting Regulation no. 133/1916 (Jacht ordonnantie 1931 Staatsblad 1931 Nummer 133) which was followed by the enactment of Wild Animal Regulation (Dierenbeschermings ordonnantie 1931 Staatsblad 1931 Nummer 134).

In 1941, a Nature Protection Law (Natuurbeschermings ordonnantie 1941 Staatsblad 1941 Nummer 167) was issued as an improvement of the 1916 Nature Monument Law. However due to World War II (and Japanese invasion in 1942), no related activities were conducted until the enactment of Law No. 5 in 1967 concerning Basic Provision on Forestry. Under this law, protected areas were divided into Nature Reserve Forest and Tourism Forest. Based on this law, the former natuurmonumenten and wildreservaat were re-designated as nature and wildlife reserves. In addition, more land was designated as new protection areas such as Strict Nature Reserve, Wildlife Reserve, Tourism Park, and Hunting Park under a Ministry of Agriculture Decree. The basis of biodiversity conservation, however, was established after the enactment of Law No. 5 of 1990 concerning Living Natural Resources and Their Ecosystem Conservation, which at the same time confiscated the previous laws issued during the Dutch Colonial Government.