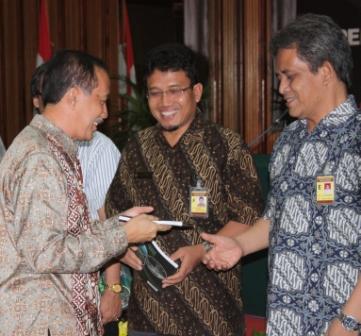 On 2 December 2011 the Ministry of Forestry supported by FORCLIME hosted an event to launch the book “Forest Management Unit (FMU) Development – Concept, Legislation and Implementation” attended by over 120 participants from the Ministry itself, other government agencies, foreign embassies, universities, non-government organizations, international development cooperation partners and the private sector. The slogan for this book launch - improving forest governance in Indonesia through FMU development - was truly reflected both in the opening speeches and in the presentations which followed about the FMU concept and early implementation experiences. As part of the launching ceremony the Secretary General on behalf of the Minister handed over a copy of the book each to all of the Directors General or their representatives. Once FMUs have been set up in all forest areas in Indonesia, all government programmes for forest development will be carried out within the FMU areas. The target of the Ministry of Forestry as stated in its medium term strategic plan (RENSTRA 2010-2014) is to have determined the area of 600 FMUs and to have 120 FMUs in operation by 2014.

The following documents are available from the FORCLIME office in Bahasa Indonesia and in English: