The Forests of Indonesia

However, degradation of Indonesia’s forests together with a decline in biodiversity has occurred on a massive scale as a result of unsustainable forest management, forest fires and illegal logging. Besides ongoing degradation, Indonesia’s forests are disappearing in an alarming rate mainly due to conversion of forest land in other land-uses.

This high rate of deforestation has varied between the different periods:

Trees and  other  vegetation  play  a  critical  role  in the global carbon cycle. Growing forests actively sequester carbon dioxide  from  the  atmosphere,  and  through the process of photosynthesis convert this into biomass. The result of this cycle is that mature forests store large amounts of carbon, locking it up in the trees and other vegetation as biomass,  both  above  and  below  ground. While forests remove CO2 emitted by burning fossil fuels, deforestation sends this CO2 into the atmosphere.

The high rate of deforestation in Indonesia made the country to one of the world’s largest emitter of greenhouse gases. Especially the conversion of peatland forests and uncontrolled forest fires caused a major part of the emissions from Indonesia’s forest sector.  According to the National GHG Inventory, land use change and forestry contribute more than 50% to Indonesia’s total emissions.

Worldwide, each year about 13 million hectares of forest are lost. According to IPCC 2007, emissions from deforestation and forest degradation, mostly in the tropics, account for about 20% of current global greenhouse gas emissions (while recent 2009 studies see it as 12%). Protecting threatened forests is considered one of the least expensive climate mitigation options (Stern Review on the Economics of Climate Change, 2006).

At the Climate Change Conference in Bali (COP13) in December 2007 the high relevance of REDD ("Reducing Emissions from Deforestation and Degradation") has been recognized, leading to a demand for REDD demonstration activities in order to gain experience in the field.

In the international climate change negotiations, advocates have proposed REDD as a new instrument to contribute to global efforts to reduce greenhouse gas emissions. The concept is to provide performance-based financial incentives to maintain forest cover and biomass (carbon stock), in other words to manage forests sustainably rather than cut them down. These incentives are to be backed by improved laws and strong institutions.
To make REDD effective, at least four challenges must be overcome. Conservation of  forest  in  one  area  must  not  lead  to  increased  deforestation  in  another ("leakage");  countries  must  stop  forest  loss  not  only  now  but  in  the  future ("permanence") and develop methods to verify and monitor reduced emissions.
Most importantly, the proposed REDD payments and distribution schemes must actually benefit people using the forests and so become incentives to conserve forests.
Reducing emissions from deforestation in developing countries would not only address a major source of greenhouse gas emissions but would also pave the way for developing countries to play an active part in emission reduction efforts under the international climate regime.
The idea of promoting incentives for forest conservation in the climate regime is almost universally praised as an important and substantial contribution to international climate policy.

How Indonesia is Managing Forests and Climate Change

According to the National Development Planning Agency BAPPENAS (Yellow Book, 2010) the forestry sector policy objectives are:

Priority activities in the forestry sector are as follow:

The programme's overall objective is to reduce greenhouse gas emissions from the forest sector while improving the livelihoods of Indonesia's poor rural communities. In order to achieve this goal, the programme team will support the Indonesian Government in the design and implementation of various legal, policy-related and institutional reforms aimed at the conservation and sustainable management of forests at the local, provincial and national levels. The geographic focus of FORCLIME is Eastern Indonesia and the Provinces of Central Sulawesi, Papua and West Papua. Support for the local implementation of international forest policy mechanisms, including REDD+ under the Climate Change Convention and the Access and Benefit Sharing Mechanism (ABS) set out under the Convention on Biological Diversity is an essential feature of the programme, and is resulting in decision-makers with experience of how international concepts can be implemented on the ground. 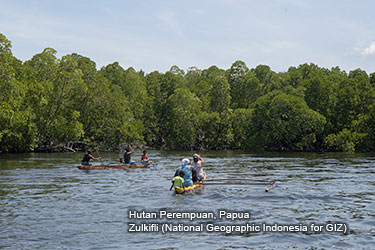 GIZ works with the Ministry of Environment and Forestry on national policy and sector strategies, to gear these strategies towards the requirements of emission reductions. Effective stakeholder participation is a critical success factor in all planning and strategy development processes. 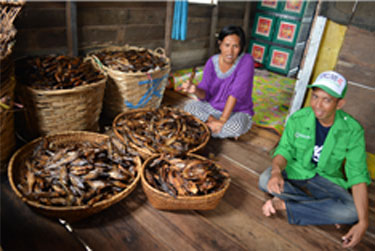 The government of Germany commissioned KfW for financial and GIZ for technical support of FORCLIME. REDD demonstration activities financed by KfW are – together with other initiatives (i.e. AusAID; TNC; WWF) – among the first REDD "on the ground projects" in Indonesia (and worldwide). The REDD pilots are meant to demonstrate that local development, sustainable forest management, biodiversity conservation and climate protection go hand-in-hand.

Click the "Read more" on this section to visit FORCLIME-FC's site.