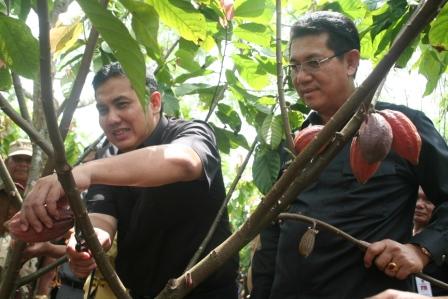 Malinau, Lidung Keminci. On 21 February the Minister of Disadvantaged Regions Ir. H. A. A Helmy Faisal Zaini was welcomed amidst great festivities and traditional dances to Lidung Keminci in the District of Malinau, East Kalimantan. The Minister is travelling to the districts in remote areas and border regions in order to get into personal contact with the local people. One stop on his tour was a local farmer’s plantation of successional agroforestry which had been established in 2011 with support of the FORCLIME Programme as a demonstration plot for sustainable cocoa production.

The Minister expressed his support for the Bupati of Malinau Dr. Drs. Yansen T.P. MSc. in his plans to further develop the sustainable cocoa production in the District, in line with the government’s target to become the world’s leading cocoa producer. He also mentioned the importance of improving the processing sector of agricultural products.

Furthermore, Ir. H. A Helmy Faisal Zaini announced that the Ministry of Development of Disadvantaged Regions will spend more than 13 billion IDR for the improvement of the road infrastructure in the district of Malinau in 2013. As in 2012, the Ministry of Development of Disadvantaged Regions will again spend 2 billion IDR for the support of the farmers with the distribution of rubber tree seeds, artificial fertilizer and pesticides in 2013. The government also plans to support the farmers with harvesting and processing the rubber in three years to ensure a good quality.

During his visit the Minister and his delegation engaged in a lively debate with representatives of the government and parliament of Malinau District, the religious and customary leaders, producer organisations and the Member of the National Parliament from Malinau about the future orientation of public support in the agriculture sector.