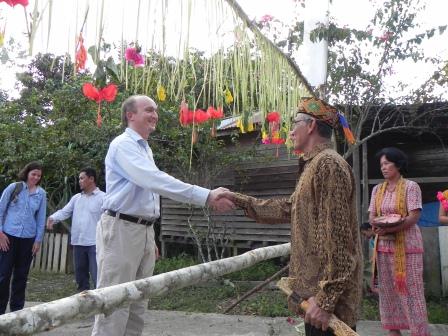 From 4-8 November Counsellor Andreas Beckermann, Head of Development Cooperation at the German Embassy, visited FORCLIME project sites in Kapuas Hulu District, West Kalimantan, to get a first-hand impression of programme activities and achievements. “To me it is very interesting to see a project in mid-process”, said Mr. Beckermann, “and to learn about the context and conditions in which the German-Indonesian cooperation operates.” The remoteness of some of the project locations impressed the visitors who had to walk for one hour from the last road accessible by car to reach one of the villages which FORCLIME has supported with participatory mapping as preparation for developing REDD+ Demonstration Activities. Another village visited was Menua Sadap where the group learned about all the necessary ingredients and challenges in supporting the development of local renewable power generation. Such steps include feasibility studies, a legal basis like the MoU between the district government and the National Park of Betung Kerihun on the promotion of renewable energy in the National Park area and its buffer zone, the setting up and training of a village management committee and finally the installation of the turbines themselves in a river that can swell by a few meters over night during the rainy season.

On this field visit Counsellor Beckermann was accompanied by the Embassy’s Press Attachée, Inge Seitz, and three journalists from Jakarta based media. “This was the first time that journalists have been invited to accompany an Embassy visit,” said Ms. Seitz at the end of three memorable days, “and I am very glad that it was a success.”