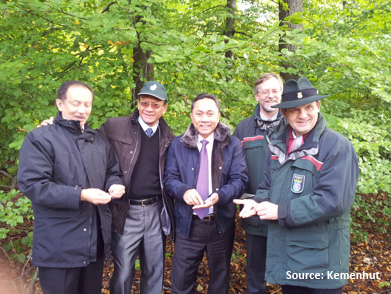 From 8 to 9 October, the Indonesian Minister of Forestry, Zulkifli Hasan, visited Germany to meet with high level government representatives with a view to enhancing cooperation in the area of forestry between Indonesia and Germany which has a 45 year old history. Minister Zulkifli Hasan had bilateral meetings with the State Secretary of the German Federal Ministry of Food, Agriculture and Consumer Protection, Mr. Peter Bleser, and with the Hessian State Secretary of Environment, Energy, Agriculture and Consumer Protection, Mr. Mark Weinmeister. Moreover, the programme included a roundtable dialogue with key persons from development cooperation and academia on the forest sector reform in Indonesia as well as a “field visit” to one of the Forest Management Units in the State of Hesse.

At the site of the Forest Management Unit visited, Chausseehaus Wiesbaden, Minister Zulkifli Hasan got first hand information about the German system of decentralised forest management structures which have in many ways inspired the ongoing forest reform and establishment of field level forest management units in Indonesia. He was accompanied by the Director General of the Hessian Forest Administration and the Director of the state enterprise HessenForst, the Indonesian Ambassador for the Federal Republic of Germany and the Secretary General of the Indonesian Ministry of Forestry.