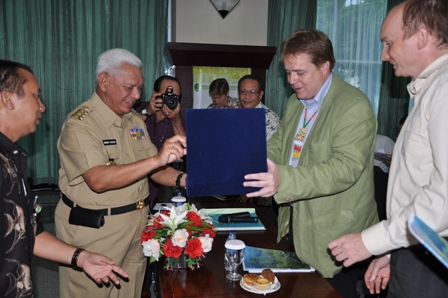 On the occasion of the German-Indonesian government-to-government-negotiations a delegation of the German Ministry of Economic Cooperation and Development (Bundesministerium fuer Wirtschafliche Zusammenarbeit und Entwicklung - BMZ) took the opportunity to visit East-Kalimantan to obtain first-hand information on the work of FORCLIME (Forests and Climate Change - Programme) and DeCGG (Decentralisation as Contribution to Good Governance - Programme), both programmes supported by the German Government. The mission was composed of representatives of BMZ, members of the German Embassy, GTZ, KfW, and DED and was headed by BMZ’s Deputy Director for Asia, Mr. Dominik Ziller.

Stations of the journey were Tarakan, Malinau and Samarinda, the Provincial Capital of East Kalimantan. Talks were held with the Mayor of Tarakan, with representatives of the local governments of Malinau and also with members of the local government and residents of the villages of Pulau Sapi and Sepulang (Malinau), as well as with the Governor of East Kalimantan, Dr. H. Ishak Awang Faroek.
The visit to Pulau Sapi and Setulang was considered by the BMZ delegation one of the highlights of the trip. Topics discussed concerned traditional landuse, the situation of access to land and to natural resources.

As a matter of course, support of the German Development Cooperation (DED, KfW and GTZ) in the area of forests and climate change was one of the main issues discussed. To this end the delegation gathered information at a Forestry Training Center in Samarinda discussing issues such as capacity building activities as an opportunity to develop tailor made training modules in the fields of climate change, forest administration reform, sustainable forest management, and community based forest management. In this context the delegation also caught up on the current situation of forest fires in East Kalimantan and paid a visit to the Forest Fire Management Unit which followed from the former IFFM (Integrated Forest Fire Management), a then German supported KV project.

Before leaving Kalimantan for Jakarta the delegation paid a visit to the Orang-Utan rehabilitation Center (BOS) in Balikpapan to gather insight into the precarious situation of the highly endangered primates, due to destruction of their natural habitat.

Ahead of the government-to-government-negotiations on November 24th, the delegation made a courtesy call to the Secretary General of the Ministry of Forestry, Dr. Hadi Daryanto, on 23rd November 2010, where both parties expressed their appreciation of the long and successful cooperation between the two countries and intention has been declared by Mr. Ziller to continue the support of biodiversity conservation programmes as one of the areas of collaboration.
In retrospective of the delegation´s prior visit to Kalimantan Mr. Ziller expressed his appreciation of the commitment and involvement of the local government and the local communities as well as of the implementation of the bilateral programmes in East Kalimantan.

Mr. Ziller also outlined one specific challenge, Indonesia currently faces in the context of its rapid development:
“Indonesia´s progress in economic development has implications for our cooperation. The country´s biggest challenge is how to simultaneously promote economic progress and conservation of natural resources. In this regard Indonesia has emerged as a global as well as regional player having its share of responsibility in the resolution of global challenges such as climate change. We have to look much more closely at areas in which the German contribution makes a difference and where support goes beyond filling financial gaps. Indonesia and Germany are no longer in a donor-recipient relationship but rather embedded in a partnership of global players.”

“On November 24th, the governments of Germany and Indonesia agreed on a landmark financial package of 353 million Euros (almost half a billion US-Dollars). The multiannual programs mainly aim to support Indonesia´s efforts to increase the share of climate friendly renewable energies in the national energy mix. For this purpose Germany will finance the construction of geothermal power plants earmarked as priority projects by the Indonesian authorities. A further commitment is aimed at financing a new generation passenger vessel which will increase the mobility of citizens in remote areas of Indonesia. A further commitment targeted to enhance climate protection is embedded in the International Climate Initiative of the German Government and implies projects with a volume of 15 million Euro.”

Source: Official Release by the Embassy of the Federal Republic of Germany, Jakarta